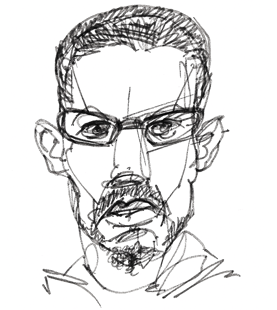 On Sunday, June 17, Antonis Samaras walked into the press centre as the winner of the repeated Greek parliamentary election. It was late at night, and the leader of the conservative New Democracy party was flanked by a gaggle of sweaty and decidedly rotund admirers. To a clued-in observer, the very girth of these men was a signal that the sordid operation jointly engineered by the international financial institutions, Bruxelles, Berlin, the world’s largest banks and the global corporate media was entering its next phase.

The ancient Greek elites that ran the country for the last forty years only to literally bring it to the brink of third-world destitution now finally handed it over to the international financial gamblers. What hurts the most is that almost a half of the Greek electorate decided to vote for them. The mandate the new government thus received is a mandate to implement the full gamut of its ‘modern economy’, a nightmarish vision certain to transcend the region in ever-gruesomer shockwaves.

Clearly collaborating with the international financial institutions, the EU had done all it could to hox the prospects of Syriza, the Greek coalition of radical leftist parties. Led by the charismatic Alexis Tsipras, Syriza is pushing for saying no to the drastic austerity measures. Its agenda is nationalising the banks, fighting to keep a strong public health-care and educational system, and positioning itself as a dam against the mad flood of privatisation threatening everything there is and ever will be.

How did the EU help the predators? One week before Greece’s election, Brussels granted Spain one hundred billion euros of aid – an action many Greek voters interpreted as the promise of a softer-cuts scenario for them as well, if only the conservative block is voted back into power. But this was only a skillful feint. Brussels, Berlin and Washington were simply nervous about Alexis Tsipras, the Syriza leader, possibly having some sort of a back-up plan to follow the country’s pullout from the Eurozone… A back-up plan that would probably be all about forging new alliances with Moscow or Beijing.

Global capitalism fighting for its own survival

»This election was crucial for the survival of global capitalism,« feels Statis Gourgouris, a professor of classic literature at the Columbia university in New York. »The election demonstrated that the majority of the Greek people is refusing to accept the dismantling of its social and economic infrastructure. The people are refusing to condone the flash impoverishment across the broad strata of society, the annihilation of the next generation’s future, and the vilification of an entire way of life. Even more important, Greek society demonstrated it would not accept being used as an experiment in neoliberal economics.«

Professor Gourgouris told me that nothing surprised him any more, least of all the cynicism of both global financial power and the mainstream media in its service. »It is, in many ways, an old story. This is not the first time in history where the fate of whole societies is held in the hands of bankers. But we would do well to remember that when this is pushed to the extreme, societies tend to unravel in extraordinary violence. Given the fact that, as a political ideal, the EU was established to prevent just such an unravelling, it is remarkable to watch its political and economic leadership pursue such a catastrophic course against all prudence and good measure. Greece is a small country. It is also a small economy. This is why it was selected as the laboratory for an experiment in extreme neo-liberalism. But the entire European population now watching needs to realise that Greek resistance to becoming such an experiment has vast consequences since it pertains to the future of all. If Greece goes down and is successfully shackled by the commands of global capital, there will have emerged within the ranks of the European Union a precedent that dismantles the union’s own sovereignty as a political project. However it happens, be it by total capitulation or by expulsion, well – for the EU, killing Greece is like commiting suicide.«

The rape of dignity

Greece is being transformed into a classical third-world country. In March, youth unemployment reached fifty percent. The welfare state is vanishing at a flabbergasting pace. In the last few months, the European monetary institutions made the Greek politicians cut pensions by an average of 200 euros. The minimum monthly wage fell from 800 to 568 euros. This year alone, some 15 000 public-sector employees are bound to lose their jobs. The state is being shrunk on every possible level, and health and education are the ones taking the most savage beating.

A few days ago, the managing director of a mental institution located on the Leros island sent a letter to his ministry of health. In it, he summed up what had been going on in countless other hospitals all over Greece. »We are notifying you we are no longer able to feed our patients,« the director, Yannis Antartis, wrote in his letter: »Many now have to go hungry. We no longer get any food deliveries, for we are unable to pay for them, being heavily in debt.«

Costas Lapavitsas, the economics professor from the London School fro African and Oriental studies (SOAS), feels the original sin of the Greek crisis was the country joining the Eurozone in 2001. Instead of pity, he urges, his country now needs concrete assistance. The Greek crisis is in fact the crisis of the entire Europe, and as such it demands a pan-European solution. Success is possible only if that solution is forged in order to help the people, not the fatcats. Lapavitsas is the first to agree far too many people in Greece hadn’t been paying their taxes. But these were mostly the same people who’s recklessly usurped the important state offices to push the land over the brink of third-world serfdom. »There is no doubt that Greece needs root-and-branch change,« Lapavitsas points out: »But the necessary reform is unlikely to be delivered by the dominant social layers. Again: these are precisely the people who do not pay taxes, preside over extensive networks of patronage and are therefore desperate to remain in the monetary union. Genuine reform in Greece must be led by the working people, most of whom are paying their taxes meticulously.«

According to Lapavitsas and countless other critics, austerity has led to lower public expenditure and higher taxes, thus reducing demand. »This opened our bussinesses up to a great deal of additional grief, particularly as banks have also reduced the supply of credit. The results are now clear: rising unemployment, plummeting consumption, very little investment. Unemployment at 22% and loss of output around 20%? These are the figures you’d expect from a country devastated by war! Since incomes across the board have shrunk, it has become more difficult to deal with both our public and private debt. Not to mention collecting taxes.«

The eminent greek economist believes we are not far from the Eurozone’s dissolution. He adds that Greece’s bankrupcy was a certainty from the crisis’ inception, thought the country would have been much better equipped to deal with it two years ago. »The Greek politicians need to formulate plan B. With preparatory measures and popular mobilisation, the shock of default and exit could be lessened. There would have to be major public intervention at all levels, including nationalisation of banks, capital controls, administrative measures to secure supplies of oil, medicine and food, and protection for small and medium businesses. Greece can draw on the accumulated knowledge from similar extraordinary situations, not least in Argentina after 2001.«

Lapavitsas, one of the architects of Syriza’s economic programme, believes the true victor of the Greek election is the coalition of radical leftist parties. »Not so long ago, Syriza had 5 percent of the vote, maybe not even that. Now it has almost 27 percent, and it is the official opposition. I would call that a major achievement. Syriza has come to represent all those who’ve suffered enormously from the bailout policies. There’s no doubt at all about it. However, in the last couple of weeks, there were expectations and even anticipation that Syriza might win. And because it didn’t, there is an element of disappointment among some people, even within Syriza itself. I think that’s completely unfounded. I think the outcome is basically a triumph for Syriza, which is now set to become the organized voice of Greek wage labor and Greek low- and middle-income social layers.«